The Oh, So Swanky Bert Cooper

Bert Cooper, without a doubt, is one of the only male characters on Mad Men that does not let the concept of  ‘being professional’ stop him from expressing his eccentric style.  Bert's colorful clothing and unconventional art shows that his style approach is very progressive in comparison to the other men at Sterling Cooper. From Argyle socks to modern art, Mr. Cooper finds a way to add a contemporary look to the Sterling Cooper work place. 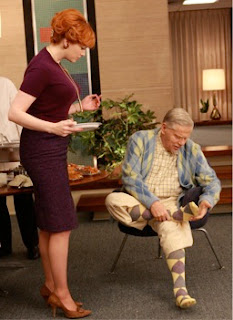 Image Credit:  http://www.deoveritas.com/blog/socks-are-underrated/
A manner, in which Bert depicts his contemporary style, is with the clothing that he wears around the office.  Mr. Cooper’s use of color and patterns shows that he is not afraid to take a risk. He finds a way to make business attire fun and stylish. Argyle, a popular pattern for Mr. Cooper, is known to add a preppy style to any outfit. Bert wears sweaters and socks that illustrate this argyle pattern constantly around the office. In addition to his choice of patterns, Mr. Cooper tends to be the only person in the office that always wears a bow tie rather than a necktie. Bow ties are notorious for formal events and bringing an outfit together in a classy way. This unique, classy persona is what makes Mr. Cooper, Mr. Cooper.

Throughout the show, another way that Bert expresses his individuality is with his admiration for modern art. Bert appreciates artwork that the other men at the ad agency wouldn’t find intriguing, which shows his individuality in comparison to all the other men. Bert is able to portray his approval for the art by displaying several pieces throughout the offices, including the conference rooms where the men discuss copy. This means that Mr. Cooper is able to influence the other men with his style throughout the office with these unique pieces of art. 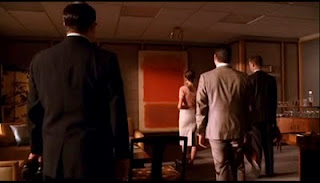 Mr. Cooper is one of the only men on Mad Men that doesn’t let wearing a suit get in the way of showing off his personality.  His unique persona is what adds personality to the Sterling Cooper work place. His artistic decisions influence all characters on the show because Mr. Cooper makes a point to have everyone notice his artwork. Without Bert Cooper, Sterling Cooper employees would not have this artistic atmosphere surrounding them.

Posted by Damned Mob of Scribbling Students at 12:42 PM

Damned Mob of Scribbling Students
Washington, DC, United States
This damned mob of scribbling students is obsessed with AMC's television series - enough so that we signed up to take a first-year writing course themed around it. We'll be posting our observations throughout the semester!